She would not tolerate the abuse any longer.

After weeks of harsh treatment at the hands of Sarai, her owner, Hagar had finally devised a plan to run away.

She lay in bed, ready and waiting.

When most everyone in the camp was asleep, Hagar rolled off her thin sleeping mat and slipped her tanned feet into a pair of walking sandals.

Stretching her arm to the left, she felt along the length of the mat until her fingers gripped a heavy outer-garment, which was folded neatly at the foot of her bed.

She stood up and wrapped the thick fabric around her shoulders. Hagar looked down to check if the over-sized cloak would disguise her growing abdomen. But it was too dark to see. She frowned, hoping her wardrobe would shield her from prying eyes once she reached Egypt.

Next, Hagar crept through her tent toward the main exit.

Silently, she stepped over the brushed dirt floor, being careful not to bump into anything.

From across the room, she could make out a faint line of moonlight peeking between the tent flaps. Her heart beat faster.

She was almost there.

Upon reaching the exit, Hagar stopped.

She waved her arms slowly, searching through the blackness for her favorite fringed shawl. Earlier that day, she had hung it over a tall urn, but she was nervous and she couldn’t find it.

Every shuffle of her feet and every breath she took sounded as loud as thunder in her ears. Hagar’s movements became frantic.

Aha! There it was.

Her fumbling fingers grasped the silky shawl at the same moment that her knee inadvertently knocked over the urn. It landed with a dull thud.

She listened for sounds of waking bodies, trembling with fear. She couldn’t imagine what would happen to her if the master — or rather, her husband — caught her escaping.

After several silent minutes, Hagar draped the shawl over her head and pulled the tent flap aside.

The night was still.

Stealing between the tents, Hagar made her way as quickly as she could toward the edge of camp.

Eventually, she reached the outer rim and paused there to look back. Her eyes narrowed, contemptuously.

She planned never to return.

Her resolve was weakened, however, by a sudden fluttering.

This was a sensation she had never experienced before. She instinctively placed the palm of her hand over her abdomen. Joyful tears rolled down her cheeks.

A child! Her child, alive and moving in her womb.

How could she leave this place?

She would soon be a mother!

And what of the child’s father?

She couldn’t stay here with him. How could she ever feel affection for a husband who’s loyalty would always and only be given to another – his first wife, Sarai?

This is what Sarai had wanted!

She had given Hagar to Abram as a second wife, hoping to build a family through her servant. But now that Hagar was pregnant, Sarai acted jealously – mistreating Hagar as if she were a common prostitute.

Hagar sneered. At least she could bear children, unlike her aging mistress.

A rustle from a nearby tent made Hagar jump.

She stubbornly wiped the tears from her face, kicked the dust beneath her feet, and staggered into the wilderness.

Travel was difficult for Hagar.

She was dizzy and nauseous from the pregnancy. The desert was unforgiving. Her lips were chapped, her legs ached and buckled beneath her, and her face was sunburned.

Panting, she collapsed to her knees and drank greedily from the life-giving water at her feet. When her thirst had been fully quenched, she lay down on her side with her head cradled in her hands.

Although Hagar had almost reached her homeland, she felt utterly defeated.  Even if she made it to Egypt, she questioned what good could wait for her there. What would become of her, and her child, in the city?

A river of salty tears rolled down the side of her face.

And then she heard it. A voice. A soft voice calling her name.

Another wave of nausea washed over Hagar, making it hard for her to focus.

“Hagar, Sarai’s servant, where have you come from, and where are you going?”

Hagar forced herself up to a sitting position. She shielded her eyes from the blinding sun and searched for the source of the soothing voice.

A man stood about ten feet away. He smiled kindly toward her.

Hagar knew it was dangerous to talk to a stranger, but she felt so alone. She hadn’t spoken to another human since she had escaped.

“I am running away from my mistress,” Hagar rasped.

The man took a few steps toward her, bent down on one knee, and spoke in almost a whisper.

“Return to your mistress and submit to her authority.”

Who was this man, and what did he know about her? Had Abram sent him?

Never! She would never return! She’d rather die.

The man tenderly continued to deliver his message to her.

“I will give you more descendants than you can count.”

Hagar’s sat up straighter. That was unexpected.

But how could she be blessed in this way? She was destined for servant-hood. And her son, her only offspring, would become the child of Sarai.

Hagar assumed the man hovering nearby was mistaken, but she was too exhausted to argue.

“You are now pregnant and will give birth to a son. You are to name him Ishmael, for the LORD has heard about your misery. This son of yours will be a wild one – free and untamed as a wild donkey! He will be against everyone, and everyone will be against him. Yes, he will live at odds with the rest of his brothers.”

With these final words, Hagar’s heart flooded with hope. For the first time in weeks, strength returned to her body. It must be true!

Who, but the LORD, could know all these things?

Although she may never be free, if returning to Abram was the path to freedom for her son, Hagar knew what she must do.

She would go back…

“Thereafter, Hagar referred to the LORD, who had spoken to her, as “the God who sees me,” for she said, “I have seen the One who sees me!” …So Hagar gave Abram a son, and Abram named him Ishmael.”

He saw her heart, her pain, her joy, her homesickness, her disappointment, her frustration, her anger, her love. He saw all of her, and he reached out to her with practical guidance and a promise of hope.

God sees you, too. 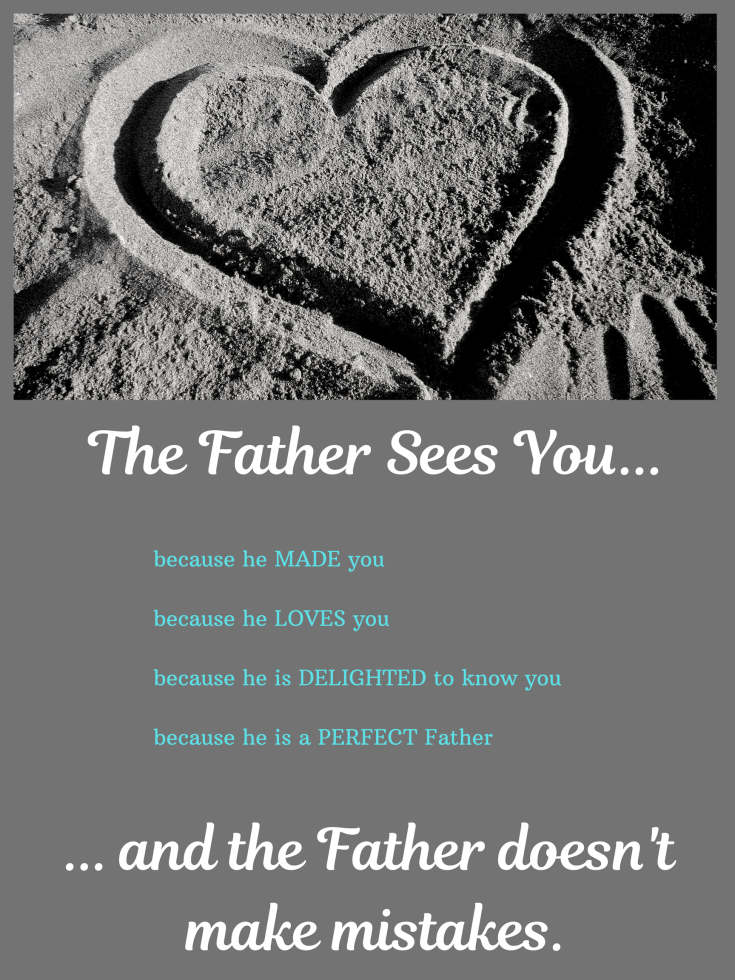 The Father is, and always will be, the only one who truly sees you.

He sees you, like no one else ever will, because He made you.

“You made all the delicate, inner parts of my body and knit me together in my mother’s womb.”

He sees you, like no one else ever will, because He loves you with an over-the-top, overkill, excessive kind of love.

“See what great love the Father has lavished on us, that we should be called children of God! And that is what we are!”

He sees you, like no one else ever will, because He is delighted with who you are! He loves to know you!

He sees you, like no one else ever will, because He is a perfect Father.

Nothing is missed. No smile or frown or hurt or joy or success or failure is overlooked.

He sees you for who you really are!

(Read how I make sure my children know that the Father sees them, here.)

How about you? How has God encouraged you at a time when you felt overlooked or unseen? Share with us and leave a comment below.

One thought on “Hagar’s Story: God Sees You (Part Two)”